this vinyl reissue reintroduces the original album art and track orders and remastered by Bernie Grundman from the original analog masters.

'Rainbow Bridg'e was compiled and mixed by Eddie Kramer and Mitch Mitchell in 1971, with the help of Electric Lady Studios engineer John Jansen. Most of the tracks were recorded in 1969 and 1970, during the same sessions that spawned 'The Cry Of Love'. the album is often misconstrued as being an entirely live album, being that the film of the same name features excerpts of a live Jimi Hendrix performance in Maui. However, Hendrix had no role in the creation of the rambling, unfocused 1971 film which was directed by Chuck Wein. Songs such as 'Dolly Dagger' and 'Room Full Of Mirrors' were bright examples of Hendrix's new creative direction. Other standouts on the album included a studio rendition of 'Star Spangled Banner' as well as the majestic 'Hey Baby (New Rising Sun)'. The one live track on the album, an extraordinary rendition of Hendrix's original blues composition 'Hear My Train A Comin' is taken from a performance at Berkeley Community Theatre in May of 1970, and not in the film at all. 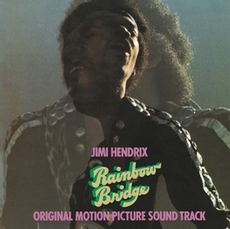