this recording captures Metallica’s performance at Monsters Of Rock at Tushino Airfield, Moscow, on 21st September 1991, where the band played a blistering set in support of their eponymous “Black” album.

It features a rich selection from that record along with classic oldies - and a few covers thrown in for good measure. 1991 was one of four times that Metallica played the Monsters Of Rock fest, but listening to this recording again now, most fans will agree that this rarely heard set was probably their finest appearance. 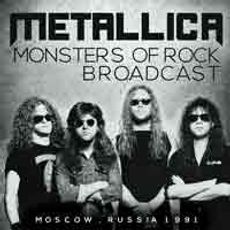