this 2cd set revives the classic 27th December 1996 BROADCAST at the forum, Copenhagen on their ‘load’ tour.

‘Load’ was a stylistic departure for the band, losing some of the heaviness and speed displayed on previous records in favour of a hard/blues rock feel. In support of the then-new album, they embarked on a mammoth 88-date tour of North America and Europe, which included a headline spot at that year’s Lollapalooza festival, which saw appearances too from Soundgarden, Rancid, Rage Against The Machine and the Ramones. Playing before an audience of some 10,000 fans, the concert was simulcast on FM radio and synched across Scandinavia and the U.S. Featuring a number of cuts from their ‘load’, including ‘Until It Sleeps’ and ‘Ain’t My Bitch’, alongside classics such as ‘Master Of Puppets’, ‘Nothing Else Matters’ and ‘Enter Sandman’. 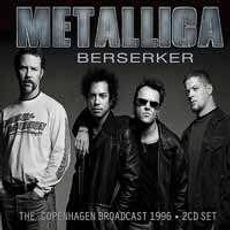