Having assembled full working instrumentals from these jams, Mackenzie and his bandmates began overdubbing flute, organ, percussion and extra guitar over the top.

The lyrics, meanwhile, were a group effort. “We had an editable Google Sheet that we were all working on,” says Mackenzie. “Most of the guys in the band wrote a lot of the lyrics, and it was my job to arrange it all and piece it together.” The result of this radical, experimental creative process is one of the densest, most unpredictable statements from a band whose work always rockets in from unexpected angles accompanied by a wealth of subtext and theorems. But you don’t even need even a passing understanding of those Ancient Greek musical modes to appreciate this adventurous new music. Highlights include ‘Lava’, a suite of pure fire music that swings between spiritual jazz and new age visions, powered by psychedelic saxophones, shimmering cymbals and McCoy Tyner-esque pianos, and the wormhole-riding prog-folk excursions of ‘Magma’, which leads unsuspecting listeners into unfamiliar realms via the siren call of Mackenzie’s flute, while ‘Ice V’ delivers apocalyptic funk with a cool hand at the controls, ‘Hell’s Itch’ hypnotises with its coiling guitar lines, hard honking harmonica and polymorphic basslines, and the ever-shifting ‘Iron Lung’ follows the choppy grooves of its happy/sad songcraft through unexpected twists and turns, a vision of pop refracted through a house of mirrors. Sinister closer Gliese 710, meanwhile, pushes ever onwards into the darkness, its lumbering-but-lithe heaviosity enough to get corpses to nod their heads. 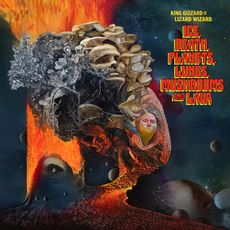