'Rock musical' in style and one of the most effective concept albums in rock history, the album was constructed by Kinks' front man Ray Davies as the soundtrack to a subsequently cancelled Granada Television play. 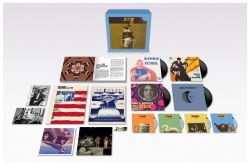