the first album, produced by none other than todd rundgren, was recorded & released in 1971 when the group was called halfnelson (the original sleeve is represented here) & features the single ‘wonder girl’. the second album (1972) was produced by james lowe, lead singer of legendary psychedelic band the electric prunes, & features the single ‘girl from germany’. this deluxe slipcased package features the rare bonus track ‘i like girls’, the lyrics, track-by track annotation by the maels, many original record labels, photos & biogs, & new annotation by acknowledged sparks expert & authorised biographer daryl easlea. 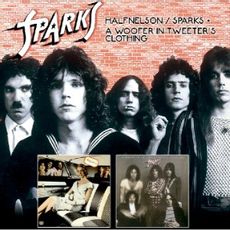