The “Hey Jude” album (1969) was recorded at Fame Studios and features Duane Allman on stunning lead guitar throughout.

The album introduced both the singer and the guitarist to new audiences, particularly when the title track was featured on Allman’s posthumous “Anthology” double album. Also included is Pickett’s cover of Steppenwolf’s “Born To Be Wild”. “Right On” (1970) was recorded at Criteria Studios in Miami and features Pickett’s hit covers of The Supremes’ “You Keep Me Hangin’ On” and The Archies’ “Sugar Sugar”, an R&B # 4 hit. The eight bonus tracks are non-album singles sides. The booklet includes lengthy annotation by acknowledged expert Tony Rounce. 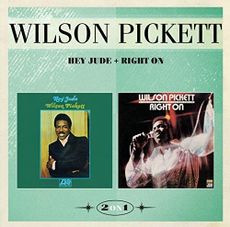