In 1970 Wilson Pickett teamed up with Philadelphia’s hit songwriting and production team of Kenny Gamble and Leon Huff to record “In Philadelphia”.

The album contained the hit singles “Engine No. 9” and the million-selling “Don’t Let The Green Grass Fool You”. For “Don’t Knock My Love” (1971), Pickett returned to Muscle Shoals Studios. The title track was his fifth and last R&B # 1 hit, another million-seller, and his cover of Free’s “Fire And Water” reached R&B # 2. The cover of Randy Newman’s “Mama Told Me Not To Come” was his last single on the Atlantic label. The bonus tracks include some non-album singles sides and recordings from 1971 and 1972 that remained unreleased until a very limited edition box set in 2010. The booklet includes lengthy annotation by acknowledged expert Tony Rounce. 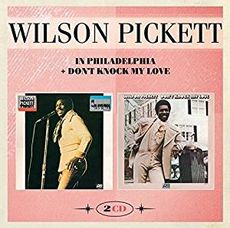