This strictly limited one run only silver vinyl edition of 'Aladdin Sane' contains Ken Scott’s approved 2013 remaster & was released on 20th April, 2018, 45 years to the day since the original release date for the album.

Previously thought to have been issued on 13th April, 1973, new evidence has come to light that proves the release date was officially the 20th, but being Good Friday in the UK the album was 'made available' on the 19th.

This silver vinyl edition of 'Aladdin Sane' isl only be available to ‘bricks and mortar’ retail stores. 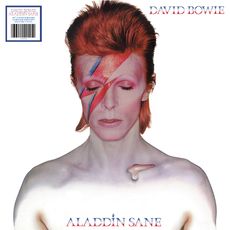