Follow us Follow us
Home  | books  | david gedge - something and nothing - tales from the wedding present: vol two

Something And Nothing - Tales From The Wedding Present: Vol Two


The stories featured in this stunning 176-page matt-laminated, hard-back book have previously only been available to readers of the Tales From The Wedding Present comic book series.

This collected edition comes with 100 pages of never-before-seen additional material and an introduction by Craig Cash.David writes the Tales From The Wedding Present narrative together with long-time musical associate Terry de Castro, and then the stories are illustrated by virtuoso artist Lee Thacker. For the past decade, they’ve been working steadily (along with editing help from Jessica McMillan) to relate David’s life and adventures.Something And Nothing is presented in chronological order; it takes up where Volume One left off – just after the release of The Wedding Present’s first single ‘Go Out And Get ’Em, Boy!’ in 1985 – and takes us through the next three years of the band’s existence. David writes intimately about all of the events leading up to the writing, recording and release of the band’s classic debut album, George Best, as well as detailing sessions that the group recorded for John Peel [including the legendary Ukrainian folk music ones], early live appearances in the UK and the rest of Europe and the development of their label Reception Records. On the way, we also learn about some of the romantic experiences that may have informed his writing. 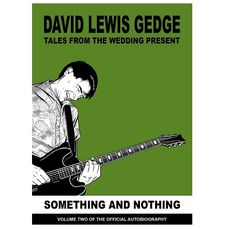