As well as making extensive use of press archives from the era, Suzi Quatro In The 1970s also includes personal reflections from an exclusive interview with Suzi herself.

'If you talk about the '70s, I was a hardworking artist. I did nothing but tour - recording, touring, TV, you know. I had constant jetlag. Constant black shadows under my eyes but, oh, what a ride! What a wonderful ride. And I'm still doing it now.' Suzi Quatro With a succession of hit singles, including eight UK top twenty hits and two number ones, sell-out tours and six studio albums, Suzi Quatro was an enduring presence throughout the 1970s, the decade that saw her move away from being part of an all-girl band in Detroit and relocate to England for a solo career that challenged old stereotypes and helped redefine the image of the female rock icon. Taking each year in turn this book takes a detailed look at Suzi Quatro's career throughout the decade where she enjoyed her greatest successes, including a comprehensive overview of each album and single released during that period, her touring schedule and her frequent media appearances, including that famous guest role in Happy Days. 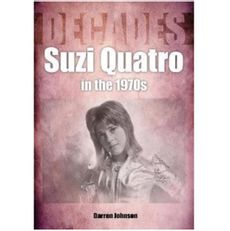