Ronnie Scott’s in London is one of the world’s most celebrated jazz clubs and this book marks the club’s 60th anniversary.

This is the frst time photographer Freddy Warren’s vast archive has been accessed and nearly all images are completely unseen. Photographs of Ronnie warming his hands around a fre and inspecting walls on the building site at Frith Street are followed by performance shots of the greats of jazz at both the ‘old’ and ‘new’ Soho locations. Warren captured Miles Davis, Art Blakey, Stan Getz, Zoot Sims, Duke Ellington, Nina Simone and many more. Powerful on stage portraits are accompanied by relaxed off-stage moments, such as Yusef Lateef holding an impromptu meeting around soup pots in the kitchen. This book is a warm and intimate portrait of a legendary jazz venue. Freddy Warren’s career as a photographer began on Fleet Street with the DailySketch and Mirror. He was passionate about jazz and spent almost every night at Ronnie Scott’s Jazz Club, becoming close friends with the jazz stars of that period. His photographs graced many music magazines and album covers doing work for the likes of Buddy Rich, Ben Webster, Sonny Rollins, Bill Evans and many more. 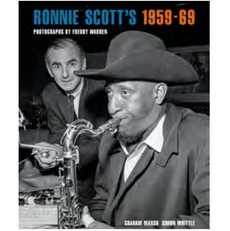