Andy Ellison fronted many cult bands like John’s Children (with Marc Bolan) Jet with members of Sparks and Roxy Music, The Radio Stars, all of which would see Andy performing hanging from Lighting rigs atop of speaker stacks, starting a riot on The Who’s tour of Germany and getting thrown off said tour, leaping into audiences from the stage and subsequently damaging himself in most performances...but aside from all that the real stories start to come through...of which they appear to be relentless like a machine gun each one more incredulous than the other. The book is liberally sprinkled with many photographs all the way through not clumped into two or three batches like most books and boasts a foreword by the one and only Simon Napier-Bell. Andy has some of THE Best stories of anyone from the music industry...and they’re in this book! 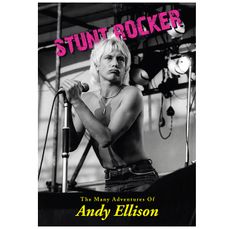