The image of Jordan with her white shards of beehive and Mondrian make-up is one of the most iconic in pop culture.

From the counter of Malcolm McLaren and Vivienne Westwood’s taboo-busting shop on 240 King’s Road, she helped shape a revolution. But who was the woman behind it all? How did a ballet-mad girl from Sussex make her way, via the clandestine gay clubs of Brighton and London, to the eye of punk’s storm? What happened after she shared so many hair-raising adventures with the Sex Pistols, Adam and his Ants, Derek Jarman and Andy Warhol – and then just disappeared? With commentary from key players and close friends including Vivienne Westwood, Paul Cook, Marco Pirroni, Holly Johnson, and her partner behind the SEX counter, Michael Collins – plus a wealth of never-before-seen images – Jordan reveals her outrageous life story. Buckle up for a masterclass in true punk spirit. ‘Jordan was the original Sex Pistol.’ Derek Jarman ‘Jordan created punk rock. She was selling it on the front line.’ Adam Ant 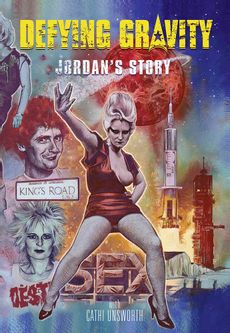