Adventures in Modern Recording: From ABC to ZTT


As a renowned recording-studio maven, Trevor Horn has been dubbed 'the man who invented the '80s'.

His production work since the glory days of ZTT represents a veritable 'who's who' of intelligent modern pop, including the likes of ABC, Frankie Goes to Hollywood, Paul McCartney, Rod Stewart, Pet Shop Boys, Seal, Simple Minds, Grace Jones and Mike Oldfield - among many others.

This book is Trevor's story in his own words, as told through the prism of twenty-three of his most important songs - from the ones that inspired him to the ones that defined him.

This play-by-play memoir transports readers into the heart of the studio to witness the making of some of music's most memorable moments, from the Buggles' ground-breaking 'Video Killed the Radio Star' to Band Aid's perennial 'Do They Know It's Christmas?', via hits such as 'Relax', 'Poison Arrow', 'Owner of a Lonely Heart' and 'Crazy'.

Offering unrivalled access to the dark arts of the producer's world and the even darker arts of the music business itself, prepare for some adventures in modern recording... 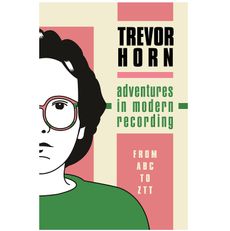 Signed copies will be signatures on bookplates.