Grammar Free in the UK: The Lockdown Letters


Hilarious letters to Punk Bands with funny replies written by artists such as gang of four, cockney rejects & uk subs.

For over a decade, ‘Team Philpott’, as their followers fondly refer to them, have been on a quite bonkers crusade, writing old-fashioned letters to punk, pop and rock stars, picking up on genuine ambiguities within their lyrics or often deliberately misunderstanding them for comedic effect. The letters are eminently publishable in their own right, but what makes this project especially deserving of attention is that it has achieved a feat never before attempted or probably even thought of. The artists quite unexpectedly started to reply, writing back in just as witty and articulate a fashion, politely pointing out exactly where the original letter went wrong...or right. Under pressure from fans to go to print, a staggeringly successful Kickstarter Campaign in 2015 raised over 18k in order to self-publish, resulting in a wonderfully impressive book which went out to the hundreds of pledgers and was met with great acclaim before being made available via Amazon prompting nearly 100 five star reviews from avid readers. This was followed in 2018 by ‘Dear Mr Pop Star’, which was if anything even better received. Then, in conjunction with our new backer, the iconic punk clothing brand Cosh Boy Clothing, we published ‘Grammar Free in the UK - The Lockdown Letters’ in 2021. This is a collection of brand new waggish letters to UK Punk bands and artists, with hilarious responses, all written during the 2020 Lockdown. Artists featured include Chumbawamba, Cock Sparrer, Ruts DC, The Vibrators, Steve Ignorant, Gang of Four, The Rezillos, Cockney Rejects, GBH and U.K. Subs. 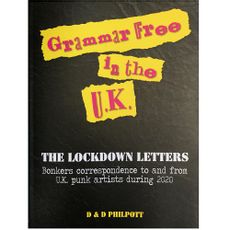