Glasgow’s justly beloved Belle & Sebastian, hot on the heels of a US tour and their best record in ages, deliver unto us decades’ worth of posters and ephemera, with an interview with Suart Murdoch on the history of the group’s aesthetics.

Novelist and longtime friend David Gordon lets us run the full text of his archival talk with celebrated painter and author Duncan Hannah (RIP – and yes he goes into detail about the Lou Reed incident described in Please Kill Me). Kevin Esquire spent hours with Motown’s almost-star from the 1960s and ’70s, Christina Carter, and we have unpublished archival images and many amazing anecdotes. Speaking of Motown, did you know that the son of the great Marxist/ Black liberation activist CLR James was in “mixed race” band Odyssey, who had a record on Motown? We have a great feature on that. Fascinating discussion between guitarist-singer-songriter-innovators Chris Forsyth and Steve Wynn. We have an amazing excerpt from Ben Berton’s new book on Dan Treacy and the TV Personalities, detailing how the first 7” came together and John Peel inadvertently named the band. Nate Carlson goes deep on the Tony Iommi era of Black Sabbath. Why Buffy Saint-Marie matters, now more than ever, by writer and musician Emily Pothast. One of our favorite writers, Sara Jaffe, tells us how her own grandfather wrote the song “I’m My Own Grandpa”! No, really! That alone is worth admission. Plus also too – there’s a terrific and long and excellently illustrated feature on the country and experimental steel guitarist Barry Walker Jr by Tom Humphrey. Our SF Indie Scene Report: 2022 is so well done that it’s going to knock your socks off. Plus Lucy Sante and Mimi Lipson and the tape column and Katie Lass on her soon-to-be classic ‘Hypnopomp’ LP and the great Jay Ruttenberg on Sessa, whew. Plus also of course beautiful images galore, and more besides. 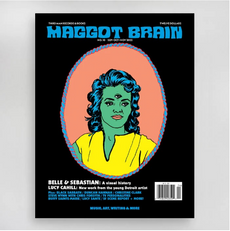