this deluxe version of moz’s 2017 album is pretty goshdarn deluxe, featuring the original album plus a host of bonus songs and live tracks taken from his limited single series.

the record that launched 1,000 conversations: he articulates his political concerns as provocatively as we could dare hope for, whilst the music itself is moreishly bombastic; ranging from melodramatic piano-backed excursions to baroque-y synthpop and everything in between. Morrissey’s talent for combining political statements and beautiful melodies is more prevalent than ever here, capturing the zeitgeist of an ever-changing world. “the ingenuity of his band and producer is exceptional; there is an intellect and an intuitiveness to almost the whole record that resonates more and more deeply with each listen” – line of best fit. 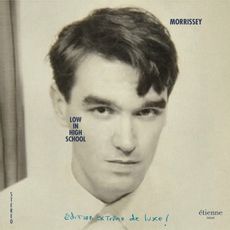