Planet Terror was part of a double feature film release between Robert Rodriguez and Quentin Tarantino.

Planet Terror stars Rose McGowan, who sings on three tracks exclusive to this soundtrack.  The majority of the score is composed by Robert Rodriguez with contributions from Graeme Revell, (The Crow, Sin City), Chingon and Nouvelle Vague.  White Vinyl. No download code. 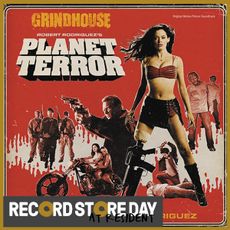