It was a top 30 album in the UK (28) & Top 100 album in the USA (97), where it also made it to No. 1 in the, then significant, College album chart. It was also Grammy nominated in the ‘Alternative albums’ category in 1992. “We want our songs to be well-regarded. Love our songs, don’t love us” – as Andy Partridge was quoted as saying at the time, could have been the template for a band that had not appeared live for several years but whose albums were greeted with near unanimous acclaim & whose songs ranked among the finest, not just of their generation, but of any generation of British pop songwriters. XTC may have arrived (in recording terms at least) in 1977 but, unlike many of their contemporaries, the band chose to progress – not a word to be taken lightly by some of the punk police in those days – delivering a series of increasingly sophisticated, yet accessible, collections of pop songs that could only have been written/performed by XTC, while allowing the listener to hear hints of the broad breadth of 20th century song-writing that informed & influenced the recordings. The album was recorded at Chipping Norton studios in 1991 & initially produced by Gus Dudgeon - best known for his work with Elton John – when the team of Steve Lillywhite & Hugh Padgham proved unavailable. Disappointed with the final mixes, the band moved to Rockfield Studios where the album was successfully completed by Nick Davis. Following the slow burn success of the 1986 album “Skylarking”, 1989’s “Oranges & Lemons” had proved successful in the UK & US charts, so there was a general expectation that “Nonsuch” would take the band to the next level of mainstream success, especially when early critical response proved encouraging. ‘The Disappointed’ duly entered the Top 40 in the UK & ‘The Ballad of Peter Pumpkinhead’ was prepared as the follow-up. Issued the week that Virgin Records was bought by EMI, the single was lost amidst the corporate chaos that followed. A third planned single – the song that Virgin had always earmarked as the one to push the album to a wider audience - ‘Wrapped in Grey’, was prepared for release but cancelled. The relationship between Virgin/EMI & band deteriorated & XTC made no further recordings for Virgin, spending much of the decade locked in legal battle with the label. Geffen, newly focused on home grown bands in the wake of its recent mega-success with Nirvana, realised that “grunge” & “XTC” didn’t fit in the same press release. “Nonsuch”, nonetheless, sold well to the large XTC fanbase at the time & has sold consistently in the 30 years since release. But the vinyl, issued in a very small pressing run - more through waning interest at the record label than an attempt to use a limited edition to boost visibility - has become highly collectable, despite its, typical for the era, fairly ordinary pressing quality. it routinely commands prices of up to £100. Now it can be heard again on vinyl, but this time on high quality 200 gram vinyl, in a new cut by Jason Mitchell at Loud Mastering & approved by Andy Partridge. 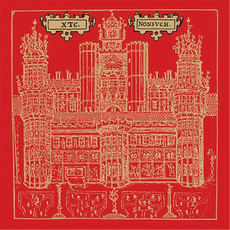