the song comes first on this album of multi-instrumental proportions, on which his indie-folk-pop sounds coalesce with a surging forward momentum that has an energy of its own – quietly powerful stuff.

While alienation has always been a theme of VanGaalen’s music, the record draws on a new kind of wisdom–and anxiety–gained as he watches his kids growing up. the record emerged from the experimental instruments that fill his Calgary garage studio. “Prep Piano + 770,” is the lone instrumental on ‘light information’, more atmosphere and chord bursts than the rest of the album’s hooky rock narrative. Throughout the dark-wave reverb of the album are stories of paranoia, disembodiment, and isolation–but there’s also playfulness, empathy, and intimacy. “anxious, tightly wound songs packed with breathless synth and guitar drama, yet still sounding deceptively simple” 4/5 – mojo. 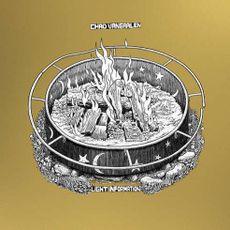