Return Of The Fabric Four


their first new recording in 18 years, the original lineup revive the sound of the swinging sixties with a cool & breezy selection of groove-laden ear worms.

trading on the influences that made them such a totem in the high days of Acid Jazz & the early days of Britpop, they present a A heady mix of Sixties soundtracks, pop art imagery & a touch of The Who. Formed in 1991, they made 3 increasingly brilliant albums on Acid Jazz & wowed audiences the world over for the rest of the decade. this record captures all of that musical drama & enjoyment over 12 new songs. Sounding like they’ve never been away, their album opener could be from the soundtrack to some lost cult movie & ‘Saturday Club’ will have you stomping around your room, looking for a pinball machine. 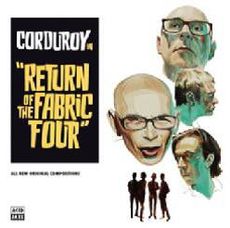