a 45 from revered Michigan space rockers Windy and Carl, Released in celebration of the duo’s 20 years as recording artistes (they self released their debut 45 in 1993).

The single is heavy with their mesmerising trademark drone & drift, with ‘A’ side “Calliope” awash with Carl’s beautiful echo laden guitar sound & Windy’s murmured vocal lines on top - lovely stuff, enhanced by the awesome package (a 2 part diecut sleeve & transparent yellow wax). the single represents something of a case of coming full circle for band & label as their first UK release came on Great pop supplement Dom’s first label (Enraptured) in 1996 & the single here seemed a logical step in many respects. 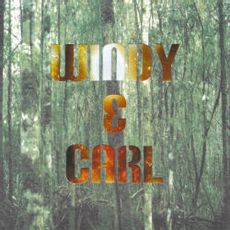