Acid Jazz label boss Eddie Piller, determined to re-release this fantastic slice of gospel northern soul embarked upon a quest to track down the elusive Mr Callier. Picked up as a protege by Jerry Butler, 'I Don't Want To See Myself (Without You)' was, to all intents & purposes, going to be his final release. Family reasons had earlier forced a retirement but Piller's persuasive pleas persuaded Callier to visit Britain for the first time to meet his considerable fanbase - a fanbase he was blissfully unaware of. Acid Jazz then released this single & the rest became history. Awards, hit albums & a re-appraised critically-claimed career followed. Backed by the haunting 'If I Could Make You (Change Your Mind)', this is the last time the single will be released on vinyl. 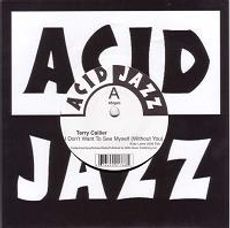