debut single from Hippies Vs Ghosts who are primarily Owain Ginsberg from Masters In France / We Are Animal.

since blasting on to the scene some 18 months ago, under this particular guise, Ginsberg has regularly blown listeners away with his kaleidoscopic, instrumental Morricone meets Krautrock sound, during which time he’s served up a number of quality EPs, one off tracks and a stunning debut album, ‘Mother Tongue’. In a parting gesture to a rather productive 2014, Hippies Vs Ghosts sign off with brand new 7″ single ‘Wazo’. ‘Wazo’ captures the very essence of Hippies Vs Ghosts; Krautrock indebted psychedelia of epic proportions. Propelled onward by a chugging bass and persistent percussives, it hurtles along at breakneck speed with menacing intent, bending and contorting through a sea of swirling noise and scorching riffs. Urgent, catchy, and oh so irresistible! B-side companion ‘Hibou Calling’ is a much more tempered affair. A gentle acoustic strum, soft percussion and hushed repeated vocals fuse with some floaty sonic sounding atmospherics to soothe the soul and whisk one’s mind away to a lofty transcendental plain. 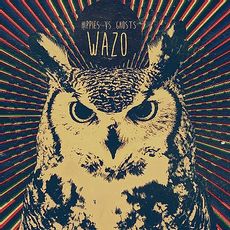