the 2nd single to be taken from Inspiral Carpets’ new self-titled album – their first in two decades – which was issued in October 2014 to critical acclaim.

‘Let You Down’ boasts a wonderful guest appearance from legendary punk poet John Cooper Clarke. This exclusive single version is joined by a unique, previously unissued B-side, ‘It’s A Good Job Baby’. ‘Let You Down’ has already become a firm favourite with the band’s army of fans. 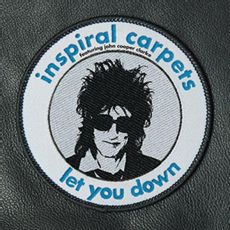