'Baptizm’ is a record of two halves, the ornate, gothic waltz of ‘Imp’ & ‘Hex’ grinding against the pounding mechanical violence displayed on ‘Bloody Eye’ & ‘Straps’.

Over the past two years Rabit has developed a formidable reputation within the underground via a steady stream of acclaimed 12” releases & mixtapes. With strong ties to similarly buzzed about producers Mumdance & Logos - having worked with both on a number of releases, culminating most notably in a guest spot on the latter’s debut album ‘Cold Mission’, one of 2013’s most acclaimed electronic albums - as well as affiliations with the severely hyped Janus crew (M.E.S.H. designed the artwork for ‘Baptizm’) & a genuine hit on the British grime scene with his Riko-featuring ‘Black Dragons’, Rabit feels poised to breakthrough in 2015. 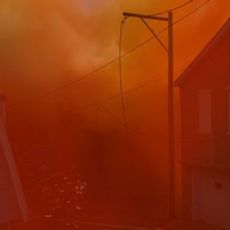