When The Stillness Comes/Black Magic (Live At Wacken 2014)


Two-time Grammy winning Slayer have been described as “one of the great American rock bands of the last 30 years”.

· Their membership of “The Big Four” – Metallica, Slayer, Megadeth and Anthrax – the four bands that defined the thrash metal genre – secures their place in music history. · Indeed, few bands come close to matching the intensity that Slayer brings to it’s live shows. With songs that mirror the turmoil and aberrations of our society – God’s terrifying global genocide, the chaos of our broken political system, the hideous minds of serial killers, Slayer remain crushing and brutal, steadfastly refusing to cater to the mainstream. · Slayer’s founding member Jeff Hanneman passed in 2013 and Exodus guitarist Gary Holt has been filling in since. Paul Bostaph , who was Slayer’s drummer from 1994 – 2001, has rejoined bassist/vocalist Tom Araya and guitarist Kerry King, and is back behind the kit. · ‘When The Stillness Comes’ is the first new track from Slayer in nearly a year and is being made available exclusively for Record Store Day on a strictly limited edition 7” vinyl picture disc. · Only 500 copies available to the UK / Eire. · It’s backed with a live version of ‘Black Magic’ recorded at 2014 Wacken Open Air Festival. · Currently the band is in the final stages of recording, with producer Terry Date, what will be the first new studio album since 2009’s Grammy-nominated ‘World Painted Blood’, expected later this year. 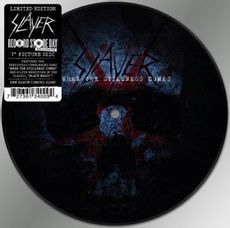