"In A Broken Dream" is a song and single by Australian rock band Python Lee Jackson featuring vocals from Rod Stewart. Released in 1972 it entered the UK chart in September, reaching number 3 in October. Stewart's vocals are not credited on the original record label, although the popularity of the song can be attributed to his vocals and star profile. He sings on all tracks on this 33 RPM EP. 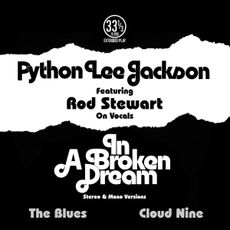