School of X, aka Rasmus Littauer, is ready with his self-produced debut album Armlock following his acclaimed EPs Destiny (2019) and Faded.

Dream. (2017). On Armlock Mø’s drummer and musical director refines his emotional indie pop into an adventurous sound that resonates with indie aficionados and wider audiences alike. School of X is on a creative roll at the moment: In November 2019 the EP Destiny was released – a collection of very personal and intimate songs. Earlier this year artists like Trentemøller, Vera, Varnrable, and more, reimagined the songs taken from Destiny on Interpretations of Destiny. While all this was going on, Rasmus was recording and producing his debut LP Armlock – due for release on May 29, 2020 via Tambourhinoceros. The album opens with the bombastic and desperate-sounding cut “Where do I start” and spans across alt-pop gems like lead single “Collarbone (feat. Lord Siva)” and “Forgot Me on the Moon” to hugely intimate ballads like “Flowers”,. “Parking Lot” and the heartbreaking closing track “Blood Flow”. In other words the new album bridges the explosive indie pop from 2017’s debut EP Faded.Dream and the minimalistic intensity of last years’ Destiny and ultimately reflects a rapidly developing artist very much in command of his own expression. “They’re definitely love songs. But they’re about moving on (together or separately), maturing from the experience, and actually ending up in a better place,” says Rasmus Littauer about the overarching theme on his new album and moves on to talking about how the record came to life. “This time I’ve included other artists in both the recording and writing process which has been so good for me and my own process. I’ve always been collaborating with lots of artists, as a session musician, co-writer or in other bands. But I honestly also have issues with not being in control why School of X has been less collaborative historically. But with Armlock I found it so fulfilling to have my friends and colleagues record and pitch in with creative ideas that I could filter, adapt, refine, and merge with songs on my own” As a result of the collaborative approach described above, artists like Spencer Zahn, Yangze, Ary, Vera, Trentemøller, Lord Siva, and more have contributed to Armlock. Aesthetically speaking Armlock might feel very contemporary on first listen, however as one listens closely layers of modern music history reveals themselves. “I always loved bands like Slowdive, Spiritualized, and Primal Scream. At the same time I have a soft spot for slowly paced pop songs like those of Sade and Whitney Houston for example. 90’s hip hop beats are also very close to my heart. These were all sources of inspiration to me on this record, and while making it I rediscovered a ton of great albums and songs. That way Armlock to me is also the wonderful feeling of being close to home and to what’s shaped me musically and personally.” Armlock is recorded in both Denmark and New York City. And it was after a night out in New York that the record’s title revealed itself to Rasmus: “The title of the album is Armlock. I came up with the title while driving in a taxi in NYC at 4am in the morning arm in arm with one of my best friends. We were pretty ecstatic about being together in this city at that moment. Literally Armlock of course also has a negative meaning. And this duality means a lot to me because one of my only real struggles is that I’m always trying to break out of what I’m doing. I’m simply scared of being stuck and of being held down by the world around me. It’s not just in music I feel like this - the impermanence of my entire existence is really a lot on my mind“ Born into a music family, Rasmus Littauer aka School of X has always been playing and performing — and in the last decade as a respected figure on the Copenhagen underground scene — a role shared with Rasmus’ brothers Jakob (Yangze) and Simon Littauer who are also artists in their own right. Their parents are folk musicians and their father also builds guitars. “I remember when I was 5 years old and was banging on a drum kit my parents’ band had in our basement. Suddenly I was actually playing a real drum beat; 8th notes on the hihat, bass drum on 1 and 3 and backbeats on the snare. I recall so vividly sitting way too high on the stool and desperately calling my mom without stopping the beat so she could see me play - it was the biggest high imaginable”. The School of X moniker is inspired by Eksskole - a Copenhagen-based anti-establishment arts collective in Copenhagen in the 1960s. Alongside his work with School of X, Rasmus Littauer has toured the world these past 7 years as the musical director and drummer for MØ and also worked with acts such as Liss, Clairo and more. 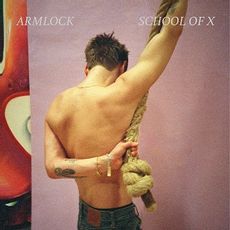