A story of time-elapsing paranoia where weeks, months, years go by as the repetitive blur overtakes. Scored by the uniquely eclectic Jon Brion (Magnolia, Eternal Sunshine Of The Spotless Mind, Lady Bird, etc) it’s a super-detailed drama with as suitably reflective, melancholy, and contemplative soundtrack. Praise for Lady Bird: “Brion’s score subtly and deftly mirrors the existential ambling of Greta Gerwig’s outstanding coming-of-age film” Pitchfork. “He (Brion) discusses popular music with the reverence and concern of a cultural historian eager to preserve a legacy at risk of extinction, but one whose own contributions to the form have continued to ensure its survival.” Vanity Fair On Synecdoche, New York, time lapses, time passes, time never stands still and Jon Brion’s melodies eat into it all, expanding the period, exploiting the movie’s longevity. “Like Brian Wilson of the Beach Boys, Brion has a savant-like ability to process melodies and turn them inside out.” New York Times. 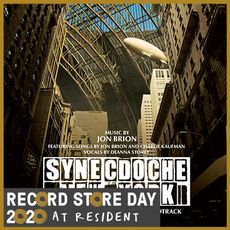