Iggy And The Stooges


Extensive 4CD set documenting the final years of The Stooges.

A companion set to 2020’s wellreceived ‘You Think Your Bad, Man?’.  Featuring studio sessions and rehearsal recordings made in London, New York, Detroit, L.A. and Michigan as the band prepared to record and tour their ‘Raw Power’ masterpiece.  Includes seminal Stooges classics – ‘Search And Destroy’, ‘Raw Power’, ‘Gimme Danger’ – alongside countless lesser known tracks and material which was never recorded professionally.  Sleevenotes from Iggy aficionado, the legendary Kris Needs and produced in association with MainMan.  An intimate study of a band on the edge, captured as The Stooges began their final descent into rock ‘n roll immortality. Following a two year hiatus, and by fair means or foul, The Stooges reunited in 1972 for their final assault on the heart of American rock ‘n roll. ‘Born In A Trailer’ compiles legendary recordings made by the band at London’s Olympic Studios and in assorted rehearsal spaces across the US as they wrote and rehearsed for the studio dates that would result in ‘Raw Power’, and their famously intense live shows of 1973 and 1974. Filled with focussed recordings showcasing a band still determined to make it, and produced in conjunction with Tony Defries’ MainMan organisation, who famously steered the careers of Bowie, Iggy and Lou Reed during that period, ‘Born In A Trailer’ is a must-hear document of one of the great bands of the age accelerating into the final lap of a career which inspired a new generation of anti-establishment rock ‘n rollers in the years immediately following their demise. 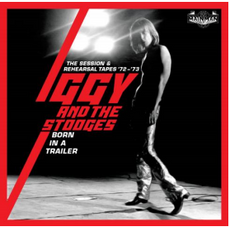