‘In Harmony’ is the first previously unissued recording of the late trumpet star Roy Hargrove since his passing in 2018.

Captured live on January 15, 2006 at Merkin Hall at the Kaufman Music Center in New York City and November 9, 2007 at the Williams Center for the Arts at Lafayette College in Easton, PA, with piano great Mulgrew Miller, ‘In Harmony’ is an intimate snapshot of two masters performing without a net at the top of their games.  The 2CD set is being released in cooperation with the Roy Hargrove and Mulgrew Miller Estates and will include an elaborate booklet with rare photos, an essay by acclaimed writer Ted Panken, plus interviews and statements by Sonny Rollins, Christian McBride, Common, Ron Carter, Jon Batiste, Karriem Riggins, Keyon Harold, Ambrose Akinmusire, Chris Botti, Robert Glasper and others.  Aida Brandes-Hargrove, President of Roy Hargrove Legacy, said: “Roy’s daughter Kamala and I are excited to collaborate with Resonance and to get this great new album out to Roy’s many fans.” 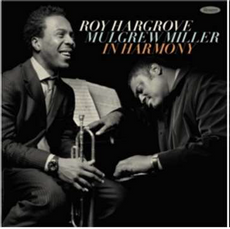