Since the 1920s, the Caribbean has been a popular target for American tourists, selfmade men, gangsters and smugglers.

The nightlife on the islands could compete with that of larger cities in the States or elsewhere. There was lots of money to spend and lots of money to make. The 'West Indies', 'the Bermudas', Cuba and thousands of tiny isles spread across the sea, where Columbus hit the new continent. Latin tinged rhythms started here,hit the popular record market back home from the late 1920s; Carioca and Conga were dance crazes in the 1930s, rural rhythms were adopted for the Blues and Rhythm field in the 40s and 50s, a fake Pig-Latin language often included. Here is a collection of fine and long forgotten examples, but without the Pig Latin that Louis Jordan or Slim Gaillard were so famous for. We dug deep in the vaults, recorded from very good 78s or old shiny vinyl, that was as closest as possible to the original quality. - Hit dat Jive and dig it! 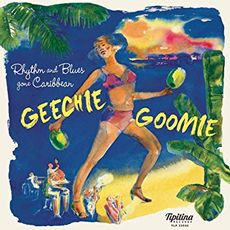