The Rough Guide To Blues Divas


The 1920s “classic era” of recorded blues was dominated by women who lived and performed in the cities. 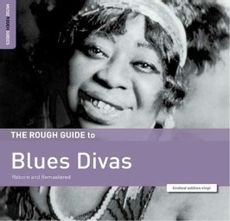