The Rockinitis series showcases electric guitar blues from the mid-fifties to the early sixties.

Unfettered pleasure in the form of Black dance music. Third time's the charm as two heavy-hitters join the fray. Wexford, Ireland’s Bill Kealy has been packing dancefloors for 30 years. He was sucked deep into the Rhythm & Blues vortex after following the trail back from the music of his youth; The Kinks, The Animals and the like. A truly international DJ, hear his sets at The Federal Rhythm & Blues Club in Crewe, For Dancers Only in Dublin, or as a regular guest DJ at top R&B clubs almost everywhere. Steve Longworth spent his teenage years dancing to Soul at Wigan Casino. He was then drawn towards the R&B and Popcorn sound. Since the early 2000s he’s been running nights all across England’s North - Soulful Shack, Down In The Basement and The Ad-Lib, to name a few. He’s played gritty Blues 45s at clubs from Barcelona to Melbourne and now regularly spins at Sheffield’s mighty Room At The Top. 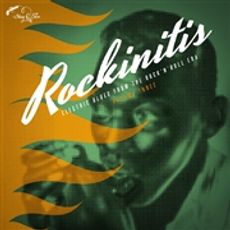