“Brother Theotis Taylor's music has become one of the most invigorating parts of my day.

His energy, his unbridled spirit and his signature touch on the piano combine to create an entirely singular sound that resonates my body from head to toe” Phil Cook (Hiss Golden Messenger, Megafaun). 'His falsetto lands somewhere between Al Green and Sam Cooke' Brother Theotis Taylor is a 92-year-old spiritual singer and piano player known throughout South Georgia and beyond for his powerful voice and heavenly falsetto. His music took him from his home in Fitzgerald, Georgia, to the stage with Sam Cooke and the Soul Stirrers, to Harlem’s Apollo, and even to Carnegie Hall. Black vinyl LP with gold-foil embossed jacket, and 8-page full sized booklet with extensive liner notes and photographs courtesy of Brother Taylor and his family. Though his releases are limited to six stunning and rare singles on the Pitch label and a single small-press LP, his recorded archive is vast. For much of his life, Brother Taylor kept a reel-to-reel recorder atop his piano at home. Brother Taylor recorded himself on this DIY home setup only when he was inspired by a higher power, often fasting and praying for days before recording. These intimate home recordings were digitized in 2020 and are being heard for the first time with this release. Revisiting these old songs brought Brother Taylor to tears. “[When I hear this music] I pick up the same spirit that I did it in. And you see me cryin’. It made me feel good ‘cause I know I did it and I did it well. And I want to see it get out, because if it made me feel good, it make somebody else feel good. Right? This is spiritual music.” 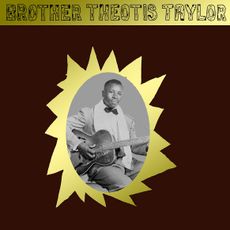