On the anniversary of his 45th year as a recording artist it seems totally appropriate (though somewhat overdue) that Ed Kuepper would release this, his first ever collection of 45’s - RPM if you will - although CD singles are also included.

From the spaghetti-western influenced opener of cult-fave Also Sprach the King of Euro-disco (’86) through the baroque overtones of penultimate track All Of These Things (’96) - an overlooked classic in anyone’s language - via the coulda-been should-been of the much covered (and much coveted) The Way I Made You Feel (’92) these tracks and the other 17 collected here point to Kuepper’s seemingly effortless ability to roll out classic after classic during a decade that was arguably his most prolific. Interestingly, Kuepper; normally comfortable in his non-conformity, gave the green light for this collection to be sequenced chronologically, a first for the legendary baird. But what does Sir Ed make of this clearly commercial manoeuvre? “I didn’t mind it one bit... in fact I quite like it.” he says, from the comfort of his Oxley bunker. No exclamation mark though. He’s not that excited. But if this collection of alternative Australian anthems is not enough Herr Kuepper was feeling gracious enough to allow a second disc comprised of b-sides, ep tracks and fan faves - just the sort of stuff we Kuepper-philes crave of our idol. Covers of Bowie, Dylan, The Loved Ones and his own extensive repertoire has our Ed round out what may be his most comprehensive solo package yet and the ultimate soundtrack to Kuepper’s first decade as a solo artist; it’s a gift. But we have said enough. Lets leave the last word to Sir Ed himself. “For now I simply wish to give a very big thanks to everyone that contributed so positively to the recordings and the releases. Onwards and upwards….” 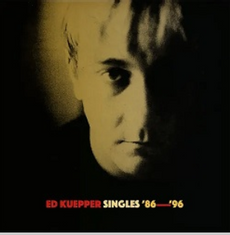