A classic soundtrack to one of Alfred Hitchcock’s masterpieces - 'Psycho', scored by one of the greatest composers to ever grace the silver screen, Bernard Herrmann ('Citizen Kane', 'Taxi Driver', 'Cape Fear', etc).

Herrmann began writing scores for Alfred Hitchcock in 1955, but the apex of this collaboration came undoubtedly with the scoring of 1960’s 'Psycho', where Herrmann’s amazing ability to set the mood has made the soundtrack to Psycho perhaps the most memorable in the history of cinema (who can recall the shower scene without recalling the sound of shrieking violins?). 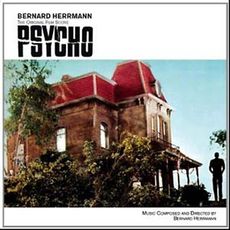