a synth heavy & pulsating score - The acclaimed score to 'It Follows' by Video game composer, Disasterpeace (aka Rich Vreeland), is receiving the vinyl treatment .

Directed by David Robert Mitchell, 'It Follows' tell the story of a teenager (Maika Monroe) who finds herself haunted by nightmarish visions and the inescapable sense that something menacing is after her. "'It Follows' is his first film score, and he’s worked diligently to build a cohesive world of ominous moods. There are several recurring motifs: a booming percussion that comes like the monster pounding on the door; a shrill klaxon signaling when danger is near; a pattern of corrupted synths chugging into motion like some futuristic train on its way to the junkyard. A window shatters. A cluster of digital hornets buzz and whine. A jet turbine spins into motion, the air supercharging to an agonizing din, only to die down and leave the room sapped of tension. It’s a score that announces when something is about to happen, only to suddenly upend expectations and leave the room on edge" - pitchfork. 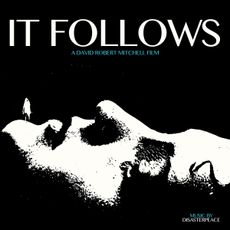