Like the film, LoDuca's score to Army Of Darkness is an ambitious blending of genre that was ahead of its time.

Part swashbuckling adventure, part horror, part comedy, ‘Army Of Darkness’ saw LoDuca reaching new heights with his composing which would later become his forte, as he bounced back and forth between composing Horror films and adventure televisions series such as Hercules and Spartacus. Performed by The Seattle Symphony Orchestra & Chorus. 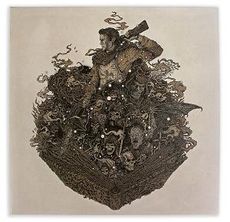