Light In The Attic / Cinewax


* Official Record Store Day release * Deluxe edition limited to 1,000 copies * Red wax housed in a deluxe gatefold “tip-on” jacket * Includes 18x24 film poster * First time on CD * First ever LP reissue “Lenin believed that the revolution would be fought with the camera and that the minds would be won in a theater rather than a battlefield.

When you go to a dark theater, you’re giving yourself to that screen and wanting to believe, and if it’s done well, you do believe.” – Dennis Hopper After the incredible success of the film Easy Rider, Dennis Hopper was given a blank check to direct and star in the bizarre, surrealist The Last Movie – released in 1971. Filmed in Peru with Hopper, Peter Fonda, Kris Kristofferson, Dean Stockwell, Michelle Phillips and others – Hopper then brought the raw footage to his home in Taos, New Mexico for editing and final cut. And that’s where the real fun began - fueled by drugs, guns, and orgies – all captured on film by director Lawrence Schiller in a 1971 documentary titled The American Dreamer – that has to be seen to be believed. The soundtrack features exclusive recordings by Gene Clark, John Buck Wilkin, John Manning, Hello People, and a Fred Neil cover – all produced by Nick Venet (known for his work with Beach Boys, Karen Dalton, Scott Walker, etc). Dennis Hopper archivist Jessica Hundley has written a lengthy essay about the film & soundtrack – including new interviews with director Larry Schiller, some of the musicians and others involved, while the booklet also features dozens of rare, unseen photos from the New Mexico madness that we’ve printed in full color in a large booklet. 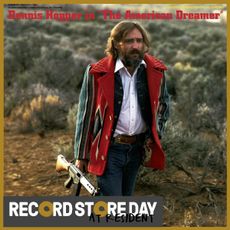