for the first time, the complete score to the 1974 film gets a vinyl form, harbouring an exceptional example of the “new minimalism” in film music of the period and marking a departure from big scores to smaller, more economic ensemble sounds.

The film was written, produced and directed by Francis Ford Coppola and is still a thrilling journey into sound, mind and murder. Heavily influenced by Antonioni’s ‘Blow-Up’ (and not, as some thought, by ‘Watergate’), Coppola wanted to fuse the concept of ‘Blow-Up’ with “the world of audio surveillance”. 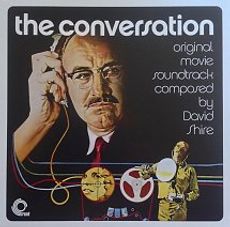