on an october evening in 2007, while dropping off two of his children, lucky dube became the victim of a botched carjacking. his death at only 43 was a premature end to one of the most remarkable musical careers south africa has known. born into poverty he rose as a musician in the zulu tradition before his heartfelt reinvention as a reggae artist brought fame throughout the world. 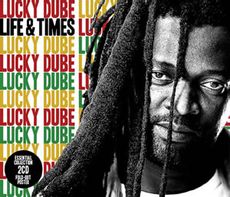