'Kung Fu Meets the Dragon' is a martial arts-themed project, largely made up of instrumental versions of some of Perry's productions (Roy Shirley's 'Hold Them', Linval Thompson's 'Kung Fu') & other musical pieces, enriched with Perry's trademark use of percussion & production tricks such as phasing, dubbing, talkover etc. & inspired by the wave of martial arts movies that were popular at the time. 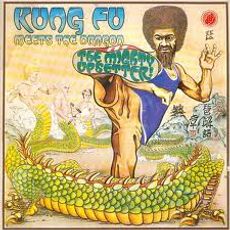