a truly unique and international release that is bound to enthral music lovers of every generation.

Alpha And Omega, true icons of the dub world have joined forces with son & nephew Alpha Steppa to create Dub Dynasty. The record, in the words of Alpha Steppa, is “an exploration of the unrelenting force of nature and the inspirational powers that brought us together to create this record.” Alpha And Omega and Alpha Steppa have called on their favourite collaborators from the UK, Ireland, South America, New York, Jamaica and South Korea to join with them in merging their pure, unadulterated dub into one of the deepest releases ever seen. "4/4 'steppers' rhythms, traditional digital dub instrumental sounds & subtle electronic ornaments, mixed perfectly into dubstep sets, their bass tones hitting as hard as any high-tech wobble" 8/10 - Mixmag 'ALBUM OF THE MONTH'. 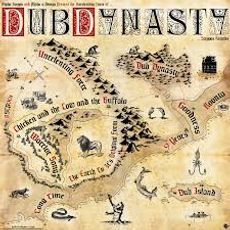