a brand new, yet vintage, 14 track Capital Letters album from 1985, the year everything was recorded.

5 of the tracks are the band's original 1985 mixes, 1 track is a live recording & the other 8 are newly mixed from the original session tapes. The music itself has something of a roots edge with title track 'Reality' & 'No Jobs' both having strong messages. There is also an entirely new mix of the bands breakthrough hit 'Smoking My Ganja' which is completed with its dub version whilst 'Reality' comes with both original and 'Oldwah' vocals & dubs. The other tracks take a different direction & emphasise how versatile the band were. Having originally formed in 1971 just for the fun of playing, Wolverhampton's Capital Letters were one of the UK's first Reggae bands. 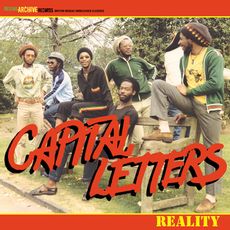