the ‘get wise’ album was only ever pressed in very limited quantities in 1975 in jamaica & sees production legend phil pratt hook up with one of the most distinctive voices in reggae music.

songs such as ‘get wise’, ‘80 percent badness’ & ‘money root of all evil’ all reflected horace andy’s excellent ability to express an understanding of the nuances of a good socially conscious song. ‘let your teardrops fall’ (which has pratt on harmony ) & ‘i will forgive you’ are both love songs that stand up well against his classic studio one material. the album has the usual stellar session players from the kingston recording scene of the 1970s. various 45s have been available from the album over the years but this will be the first time it hass been available as a full album on cd. there are 6 extra tracks on the cd & 4 extra tracks on the single vinyl album. 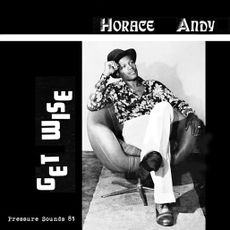