The Best Of Millie Small


After exploding onto the music scene in the spring of 1964, the Jamaican teen sensation, Millie Small popularised the sound of ska around the globe with her enduring smash hit, ‘My Boy Lollipop’.

Further British hits followed in ‘Sweet William’ and ‘Bloodshot Eyes’, while over the years that immediately followed she remained a prominent figure on the British entertainment scene, recording in a variety of styles for. In the early seventies, Millie moved to Trojan, then the world’s leading Jamaican record company, but in 1971, she dramatically and abruptly called time on her singing career, with her fans still awaiting her return, some 45 years later. This 2CD set brings together Millie’s hugely collectable ‘best of’ and ‘More Millie’ collections from 1966 and 1964, respectively, while also featuring her non-album Island and Fontana work from the sixties. 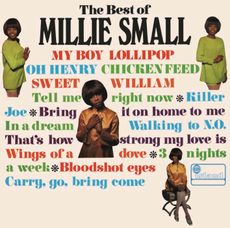