For some time, all over the world, thousands of followers and lovers of these Jamaican rhythms have tried, sometimes with luck and some with dismay, to get some of the recordings presented here on vinyl, in what is the first compilation dedicated to Roy Panton & Yvonne Harrison. Roy Panton started his musical career at an early age, and after finishing school, decided to take his passion for music and the stage more seriously. In late 1950, Roy and Stranger Cole auditioned for Duke Reid. They subsequently recorded their first work titled “Freedom Land / Adam & Eve” under the name “The Rovers”, a name that they would not be using again given that, after the recording, each went their separate ways. Unfortunately, the recording never saw the light of day. Roy recorded some songs with Monty Morris in the studio of C.C. Dodd. So, by suggestion of “Sir Coxsone”, Roy Panton and Millie Small started singing together and became one of the most prolific duos of the island, leaving behind many recordings under the name “Roy and Millie”. Some of these you can find on this LP. Unfortunately, after Millie’s departure to England under the management of Chris Blackwell, Roy found himself without a partner. However, this should not be for long. In the autumn of 1962, discovered by TIP TOP Label’s Lynden Pottinger, Yvonne and Roy met for the first time at the West Indies Studios (WIRL) of Edward Seaga and recorded their first ever single, “Two Roads” with the B-side “Join together”. 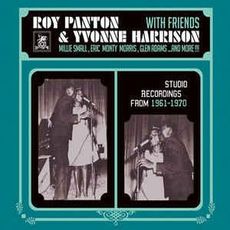